How We Met, and How Peter Put a Ring on it

How it went down

I’ve known Leslie for a long time. She has always wanted me.

Actually, she doesn’t even remember the first time we met. We were in college at the University of Missouri, at a meeting for a missions trip to Jamaica. We were asked to partner up for a game in which our legs were tied together, a balloon was tied to our legs, and we were to try to stomp on other pairs’ balloons. She approached me, batted her big blue eyes, and whispered, “Will you be my partner?”

I remember it like it was yesterday. We were literally bound together. And yet she has absolutely no recollection of this magical, metaphorical moment. (She approached me, mind you, and yet she’s wiped it from her memory.)

A year later we were neighbors in Columbia, Missouri. Though I paid rent next door, in actuality, I lived on her couch, as that was where the cable and food was. I was her friend, and she was my personal cook—nothing more (and a rather unimaginative cook at that. Green beans every….single…night).

A couple years later, after college, I moved to St. Louis while she bounced around as a travel nurse from Portland to Denver, Los Angeles, Columbia (again), Nashville, and finally, as providence would have it, St. Louis. Fun fact, she actually moved here, at least in part, for another guy. But subconsciously, we all know she moved here for me. 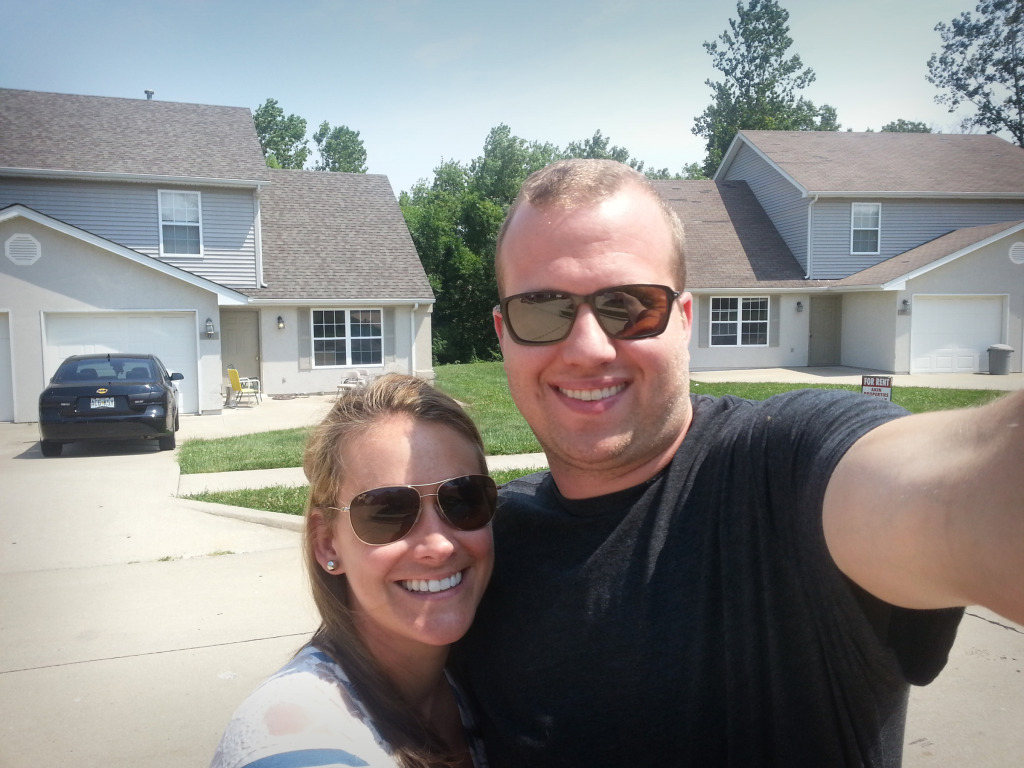 Revisiting our college digs on our anniversary weekend in 2014. Her house on the right, mine on the left.

For the duration of our friendship, I’ve counted her one of my closest friends. If I was having girl trouble and needed a female perspective, I called Leslie. When I realized I had been a bad friend and hadn’t called any of my college friends in months, who did I call first? Leslie. When I was unemployed after graduating and had no discernable sleep pattern, who did I watch late-night informercials with? Night nurse Leslie.

Why Leslie? She’s selfless without equal. She cares about other people. Not in a “I hope you’re well” kind of way, but in a “really, how are you and how can I make your life better?” kind of way. Like, a Jesus kind of way. You don’t let folks like that slip between the cracks. And I’m selfish, so the friendship worked out great for me.

That sounded bad. Easy to know, to be with, is what I meant. So when we started hanging out more after she moved to St. Louis, I began to realize how rare she is. And when you spend that much time with someone like that, well, one thing leads to another, and you eventually find yourself sharing a very awkward first kiss followed be equally awkward laughter. And then you find yourself proposing on top of a mountain a couple years later followed by even more laughter.

How it went down

First, it was the mission trip, then I forgot who he was. Next he moved in next door, and he just wouldn’t go away! We spent a lot of time together, mostly with a wonderful pile of friends, but occasionally just the two of us. 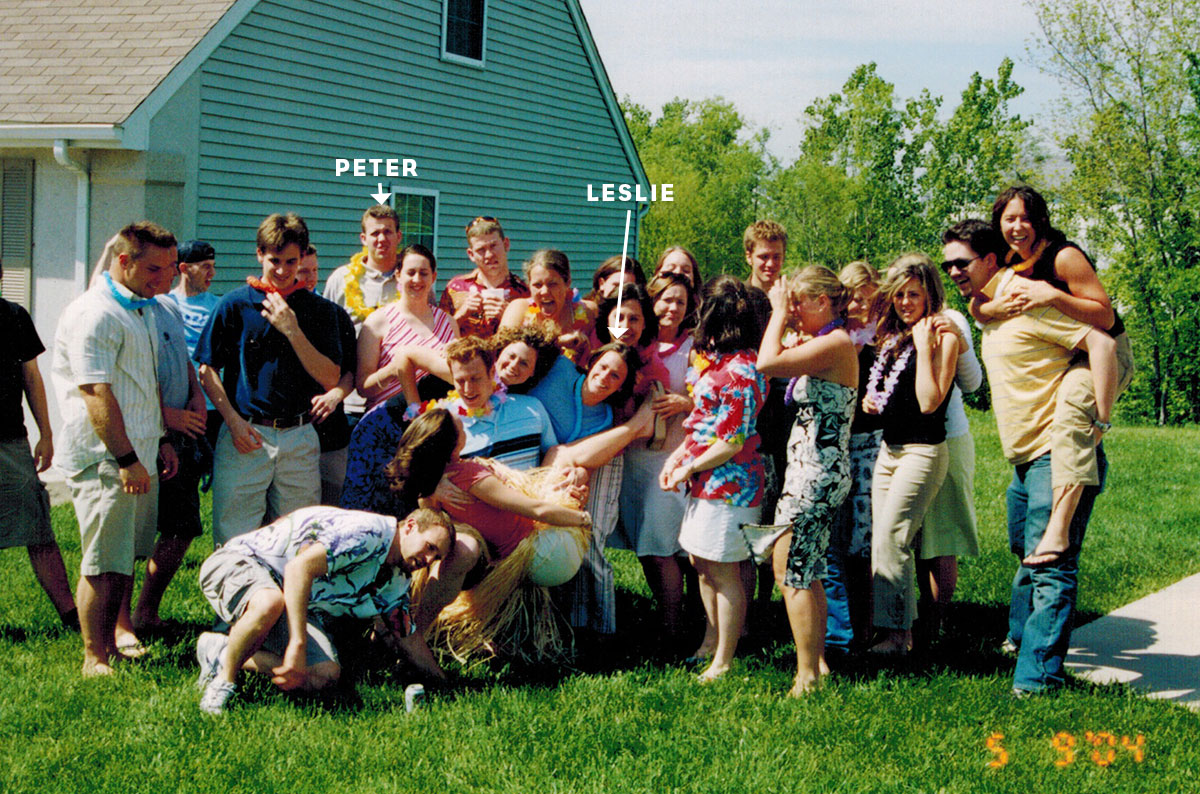 Our pile of friends in our shared front yard. The “poop smile” was a favorite photographic pose in our college years, hence Peter’s grimace.

We had plenty of late nights, trips to the lake, group dinners, and whatever else we found to entertain ourselves. It was a really great time to get to know each other. I think we learned a lot about each other in those years. And honestly, I was thankful that someone would stay up all night with me!

At some point during college, I remember a conversation with Mom in which she said, “Honey, I think you should marry Peter.” To which I replied, “Mom, gross. He’s great, but the thought of kissing Peter is like the thought of kissing my brother. I’m not doing it.” And, at the time, I meant that (no matter what he may tell you).

After a couple of really great college years, Peter moved away, got a fancy advertising job, lived in a small apartment (maybe his job wasn’t that fancy), got two cats, and found some new friends in St. Louis. However, the two of us were lucky enough to stay in touch fairly frequently, often to glean advise from each other about how to deal with the opposite sex.

Eventually, I made my way to St. Louis, where Peter (and his cats) still lived. When my last relationship ended, I called my mom in tears. Her comforting words were, “I’m so sorry you’re sad. (pause) You should call Peter.” And so I did, but not with the intention that my mom was hoping for! I called him because I needed a friend, and he has always been that—a very loyal and very trustworthy friend.

We started spending more time together…things started to get weird…I kinda like him…I think we’re dating…awkward first kiss…move in down the street…fast forward 2 1/2 years…we’re at the top of a mountain…he’s down on one knee…YES!! (Note from Peter: technically, she never said yes.)

I’m so blessed to have a man who loves me well, who is thoroughly entertaining, incredibly creative, compassionate, kind, and so much more.

Of course I said yes! (Note from Peter: she didn’t.) Why wouldn’t I want to marry someone who loves me as much as he does, and who makes me laugh every single day? Yeah, he’s a keeper!

By Leslie and Peter

So, after all that, this had better be good, right?

Leslie: In January of 2011 we went to Europe. The plane ticket was my 30th birthday present from Peter.

Everyone told me that Peter would propose in Europe. I believed them. But then I talked myself out of it. Surely Peter wouldn’t risk carrying an engagement ring through customs, on and off trains, and onto the ski slopes. I underestimated him.

Peter: Thankfully, Italian customs are all but nonexistent, so getting the ring into the country undetected was a breeze.  I swapped the fancy ring box for a plastic pill box that would rest flat in my pocket so as not to arouse suspicion (I surely wasn’t going to leave it in a bag).

Peter: I had to wait a full week into the trip before I would pop the question—when we met up with our college friend, Darby (currently living in Switzerland), who would act as location scout/accomplice/photographer. So, the first week was full of paranoia—frequently and inconspicuously tapping my pocket to make sure my sparkly investment was still there and praying that Les wouldn’t somehow notice.

Leslie: We bounced around from Milan to Torino (Italy) to Leysin (Switzerland) and then to Chamonix (France) where it would all happen. The original intent of the trip was to ski. But due to unseasonably warm temperatures and a drought, the conditions were a disappointment. But, every cloud has a silver lining, or in this case, a white gold and princess-cut diamond lining.

Peter: Normally in February, the conditions would be too miserable to take a casual gondola ride to a mountaintop proposal locale. But on this particular February day, the conditions were perfect. In fact, Leslie was even the one to suggest taking the gondola up that afternoon (wasn’t that convenient?).

Leslie: The Aguille du Midi is the highest lift in Europe. From the top, you can see Mt. Blanc (tallest mountain in Europe) and three countries.  It was (and still is) the most breathtaking view I’ve ever seen. 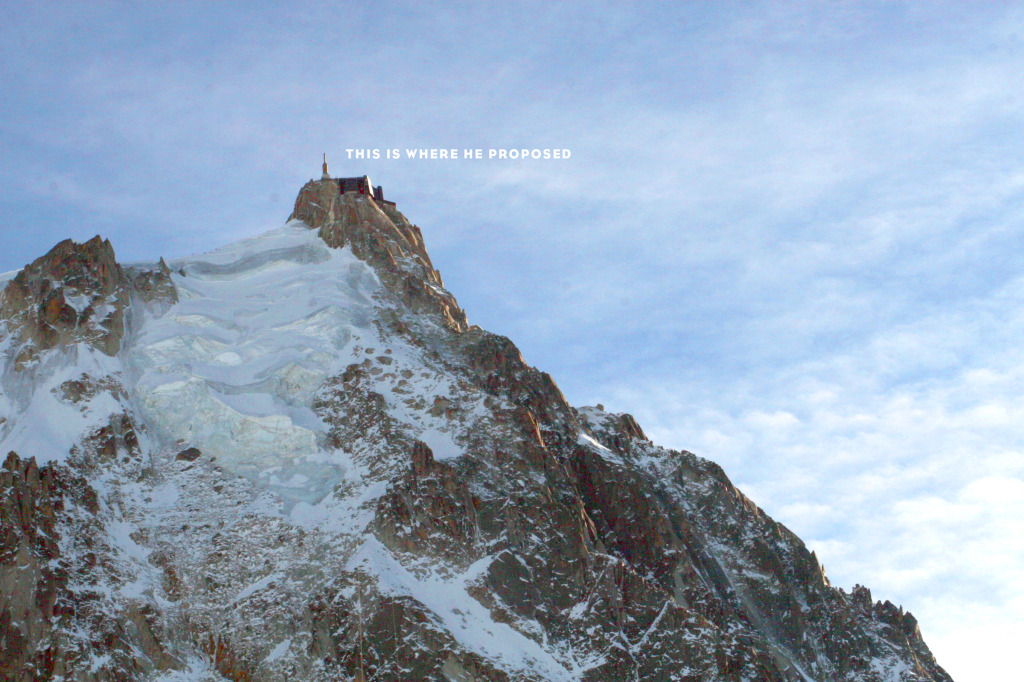 The proposal location as seen from the gondola on the way up.

Peter: I was calm and collected. Until I boarded the gondola, at which point I became a nervous wreck. This was really happening!

At the top, Darby casually asked if he could take our picture. This was so he could familiarize himself with my camera. He kept asking for another picture. And another. And another.

Leslie: It seemed a little excessive. I had no idea that Darby was practicing.  So I wandered off to enjoy the vista without the paparazzi. A few minutes later, Peter casually approached.

Peter: “Hey, I want to give you the rest of your birthday present.”

Leslie: I was confused. A ticket to Europe seemed sufficient. He explained he wanted me to actually have something to unwrap. I was still confused. Peter suspected that I suspected a proposal. So, he produced a not-at-all-ring-shaped packaged. Any excitement I might have had was squashed when I saw the rectangle he pulled from his pocket. What the heck is that? 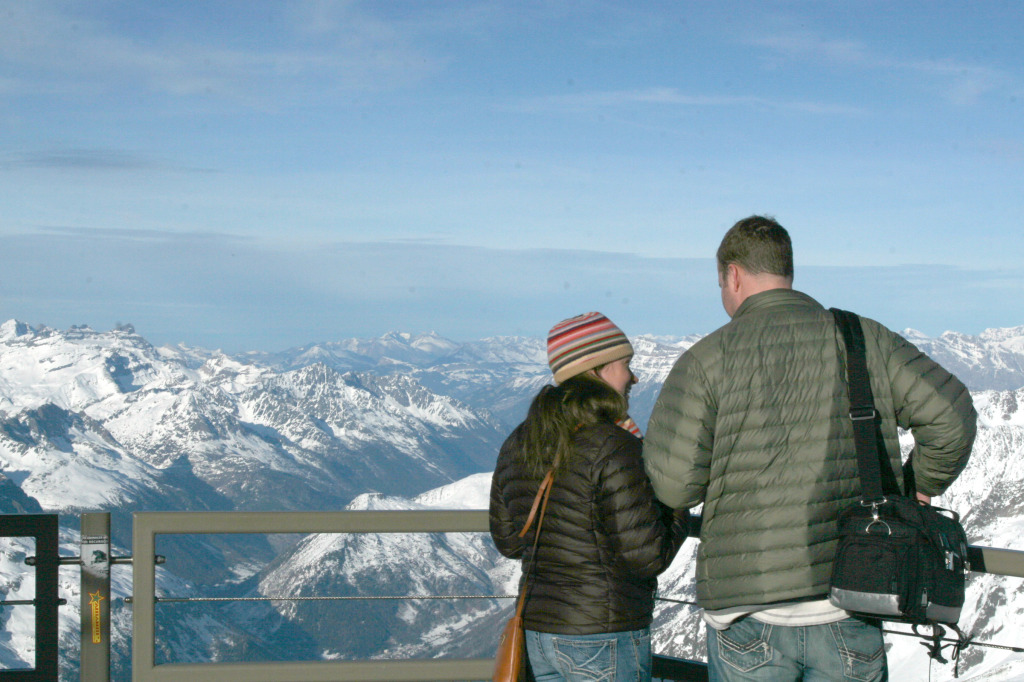 I unwrapped a $5 Target picture frame. I was annoyed. Couldn’t this have waited? Now I have to carry this stupid thing all over Europe with me…and not break it.

Peter: I handed it to her and explained that she was to take a picture of her favorite moment of the trip—something she wanted to remember forever—and put it in that frame.

Leslie: I was still annoyed. Even more annoyed. I didn’t need a frame to take a picture. But then he I dropped to a knee and said, “I’d like to submit this moment for consideration.”

It was a diamond. Well, several diamonds. Ohh, I get it! I laughed. Then I almost cried. I’m told I never said yes. I just grabbed for it with my gloved hand. Mind you, we were standing on a grated platform atop a very, very tall mountain. Peter freaked out: “Take your gloves off!”

And Darby captured it all: 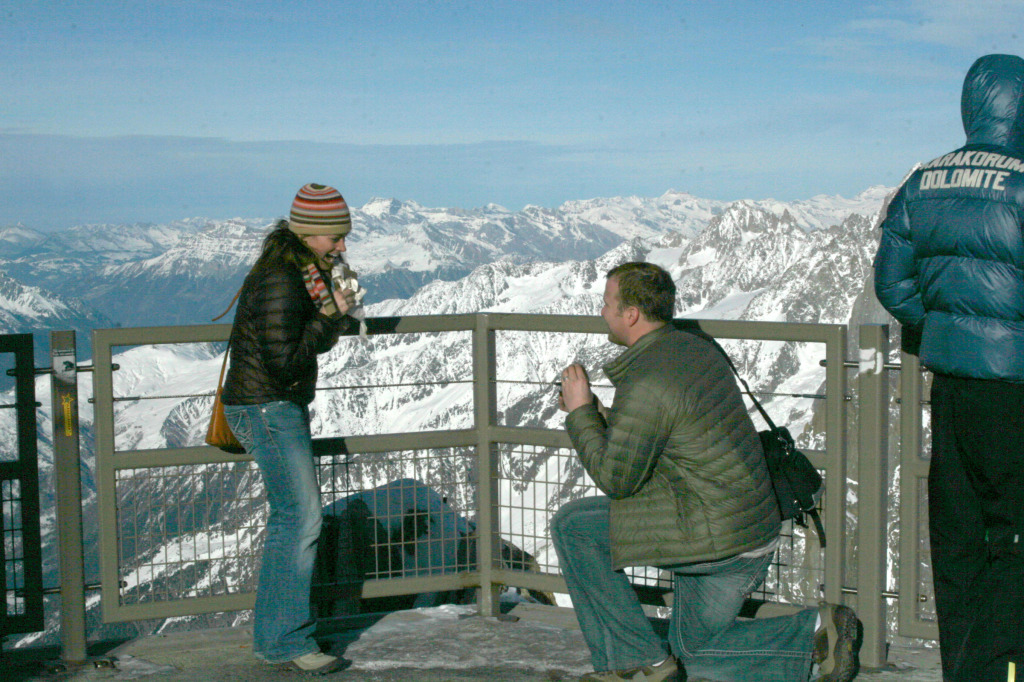 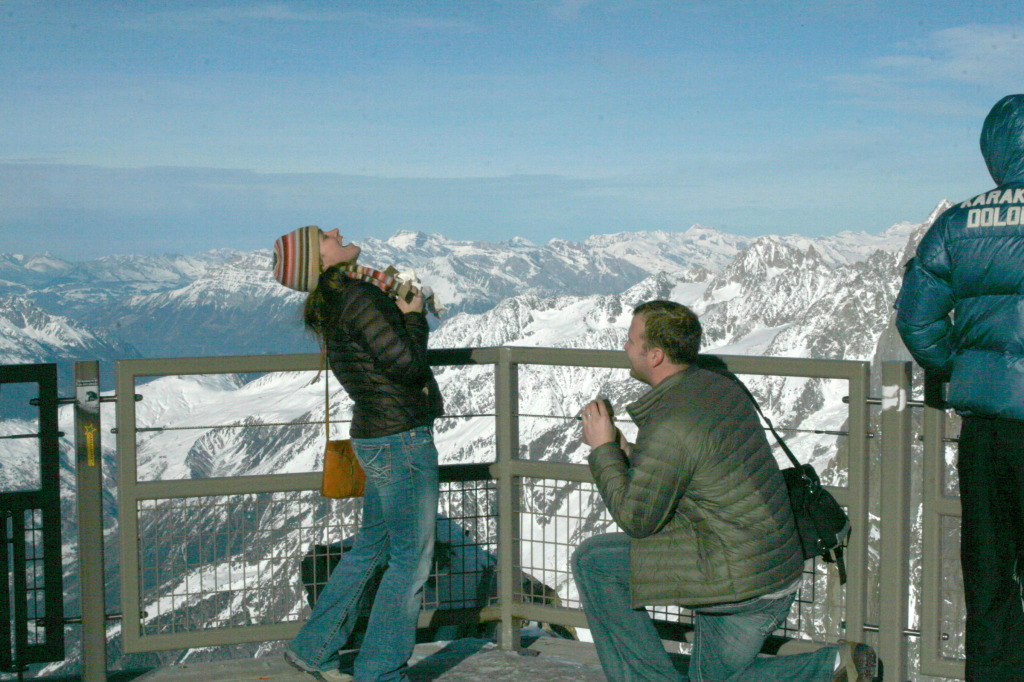 “Why are you laughing?” 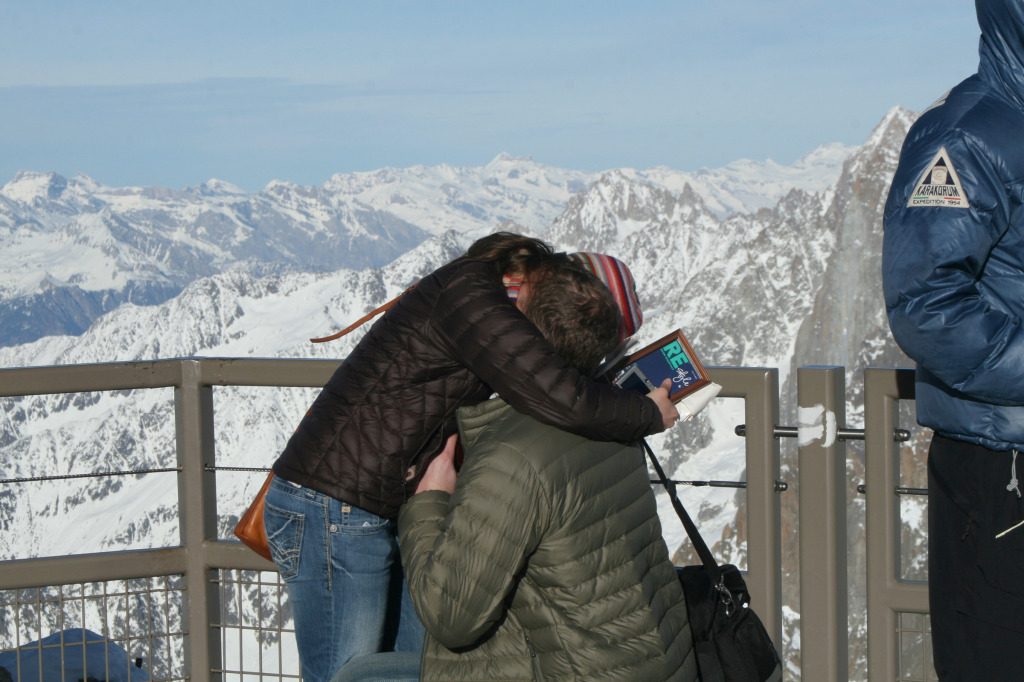 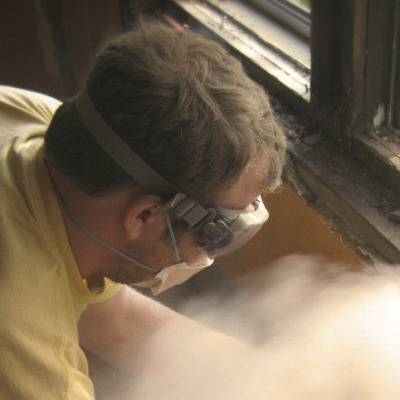 How I Got Here (by Peter)

How I Got Here (by Leslie)

Other posts by Leslie 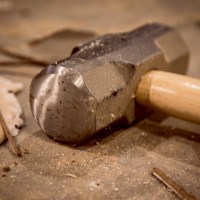